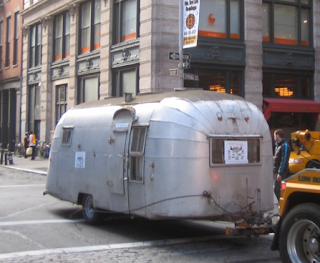 escape from the country

every so often i need to get away from day to day life and do something a little different. when i lived in the city i'd escape to the country and since i moved to the country i tend to like escaping to the city.
the plan was to hit a few watering holes in manhattan then hit the fresh snow dumps in breckenridge co. but at the last minute i cancelled the ski trip and instead opted to hang out a bit longer in the city. i had a few trailers on the move that week, two on the lower east coast that i co-ordinated the moves over the internet/phone but also had a 56 custom sitting up in new england ready to move plus i had the insides of a 1950's redbird subway carriage to pickup and ship. 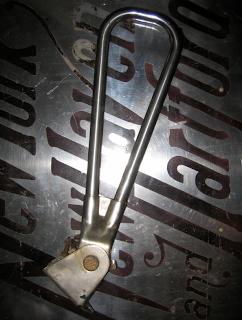 all was set for an easy trip down to manhattan with the 56 custom ready to load up with my subway stuff and head to port. the custom is kinda like half caravanner / half flying clould, a very interesting yolk. 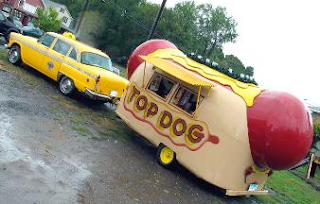 i got to visit andrea the owner of the famous airstream top dog bambi, at his home near middletown ct, he's been serving hotdogs from this 'vending' trailer for 25 years. i think he's started a craze for airstream vending in europe.


but things came to a very quick halt near westport ct, the state troopers pulled the trailer over because the plate that was out of date . i was told they should have impounded the trailer and tow car, but with the luck of the irish we got away with driving to the next gas station and got told to basically magic up a dealer/transfer plate . again with the luck of the irish the gas station owner gave me unlimited time for parking there , amazing. having worked in westport for a while i knew a little bit about the area and within 3 hours we had the trailer back on the road and heading towards SoHo in Manhattan via an overnight sleep in white plains. 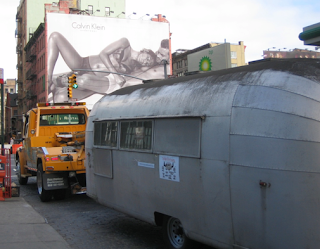 as you can see she has a very nice body, but needs a good clean up. 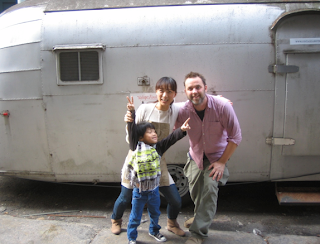 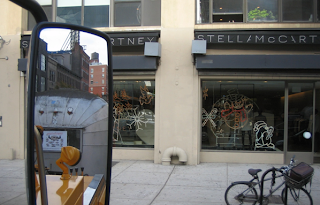 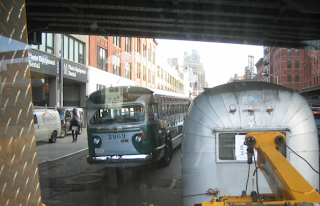 We gate crashed a photo shoot with an old new york city bus. 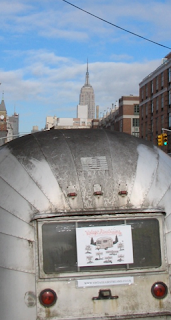 we got a good view of the empire state building. 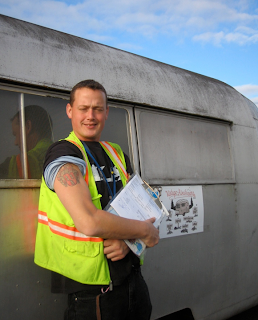 then on arrival at port we got greeted by pk ryan, he was 100% irish. twic approval was not an issue. that's his family crest tattooed on his right arm. great guy and look forward to seeing him again. 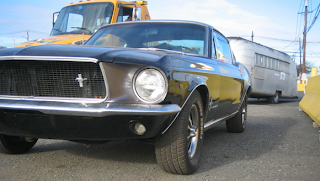 the drop went well and i had a good look around that the other bits in the yard. 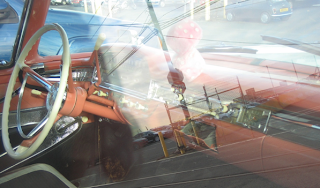 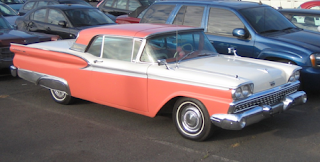 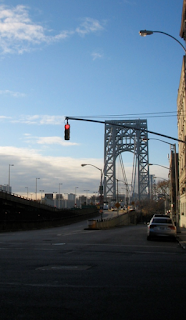 the gwb was nice n empty on the way back into town. 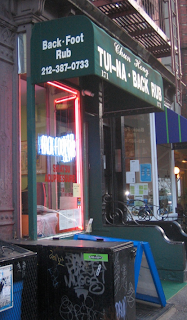 back in the hood i decided to head straight to sullivan st for a 60 mins back rub and then of to the bakery for a splice of potato pizza, i guess it's kinda like irish pizza. 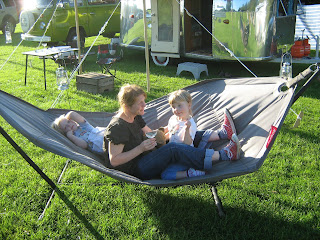 what a really great weekend in my home county gloucestershire, thank you pete and tracey for all your planning and hard work. was great seeing 13 airstreams in a rally field in the uk.

flo, scarlett, hazel and me hanging out taking in what seemed like the first and last of summer '09 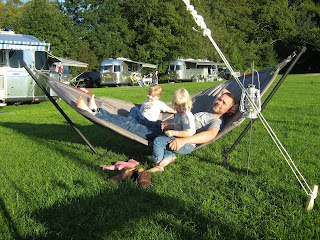 (below) flo and scarlett trying out the local produce, down the road in wales - 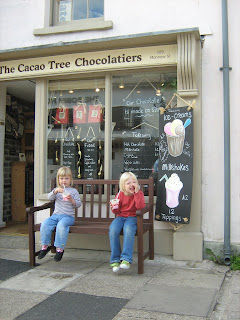 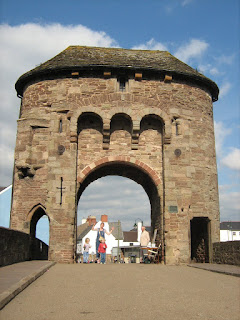 (left) monnow bridge, being jumped on by flo, hazel and scarlett. sole remaining mediaeval fortified river bridge in britain where the gate tower stands actually on the bridge. it was built in the late 1200's 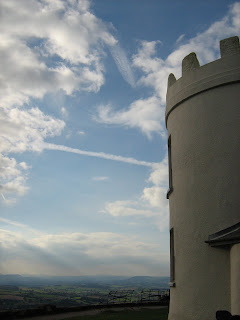 (right) and (below) the roundhouse/ aka kaymin, bit smaller than the folly we live in but much better views, and this one was visited by nelson. 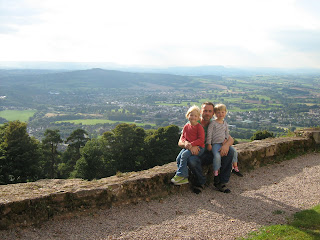 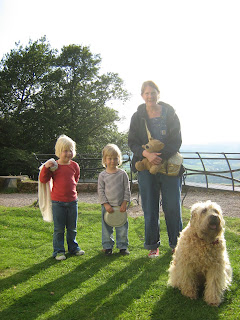 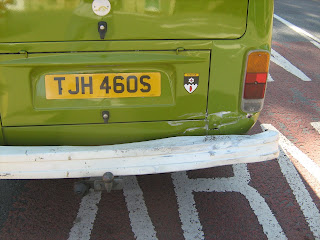 only two bad bits were leaving and our vw getting hit from behind and having to cancel my visit to the vw festival on the sunday. 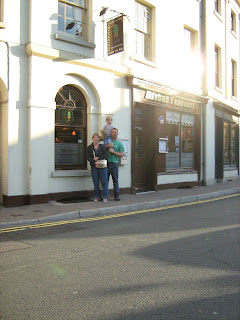 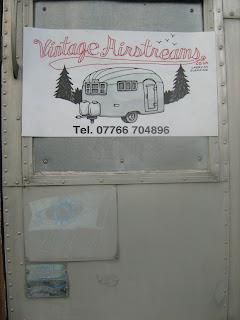 to top the weekend off i headed to southampton on monday to pickup a very nice 59 caravanner which i'm very impressed with. it's got a great body and solid floor, just a bit like my boots after a weekend camping it needs a good polish. she sold within 5 days of arriving, one week in workshop and then a new life in the english countryside starts the week after. we do have some more for sale on http://www.vintageairstreams.co.uk . 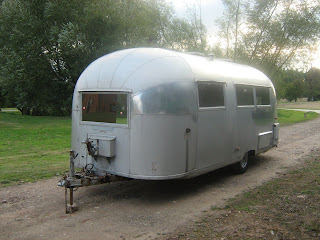 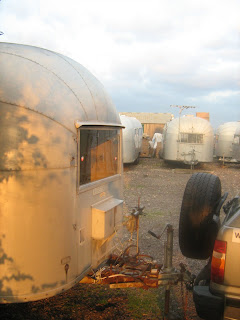 Well, safely-ish. I think there might have been a few rolls a duct tape used to keep her together for the journey......
Full credit should be given to Buckner Transport who just proved they have what it takes to handle any vintage trailer move, thank you Toni Buckner & Co.! Also proves that with careful vetting that uship is not that bad a place to do business.

Valentines day was a great success in Cumbria 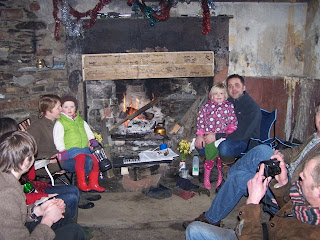 A trip to Crow Craig / Sleddale Hall in Cumbria before it went up for auction on Monday followed by a large bag of chips on the way home went down a storm with the Mrs on valentines day, she is a big With Nail fan. We did end up at the auction in London on the Monday just in case we could bag a bargain but it sold for double the guide price. 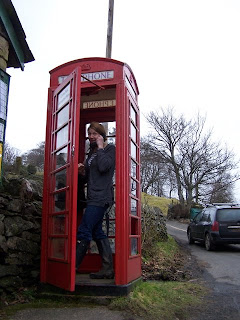 Hazel phoning London (above), from the movie (below) 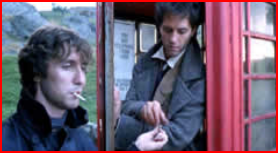 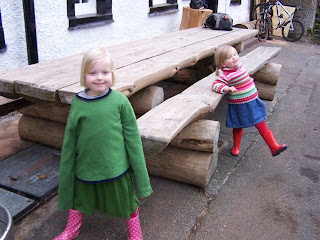 Scarlett and Flo at the Mardale Inn Cumbria, the owner of the pub who we chatted with turned out to be the winning bidder at the auction on Monday.
For boys only, the toliet walls in the pub are covered in these images -
http://www.womeninwaders.com/
Posted by 99.7% pure at 14:13 1 comment: